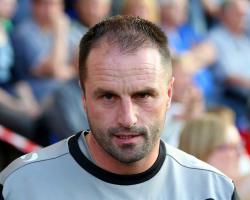 The 36-year-old Northern Irishman was hired to his first senior managerial post just 131 days ago as Latics sprung a surprise with a left-field appointment.

Kelly admitted he would have to prove himself to supporters upon taking the position and after one win in nine games, he had done little to win them over.

The thrashing at SportsDirect.com Park at the hands of Posh, who are managerless themselves, proved to be the final straw and Latics issued a statement after the game confirming they were moving on from Kelly, who leaves them 19th in the Sky Bet League One table with seven points from as many games.

A statement on their official website read: "Oldham Athletic (2004) AFC Limited can confirm that first-team manager, Darren Kelly, is no longer in charge of first-team affairs at the club.

"The board of directors would like to place on record their thanks to Darren for his contribution to the development of the club during his tenure and wish him well for the future.

"The club will not be seeking any applications for the role of first-team manager at this time and can also confirm that all the current coaching staff will remain in their respective roles."

Assistant manager Dean Holden, who had been in charge at the back end of last season when Lee Johnson left for Barnsley, conducted post-match press duties following the Peterborough loss.

"What the board decide is up to them, but all the staff will keep giving everything and I don't think our commitment can be questioned," he said.

"We've spoken to the players in no uncertain terms because that game was a good thrashing, there's no getting away from it.

"This isn't a time for finger pointing, it's a time for everyone to look themselves in the mirror and ask whether they are doing enough."

Oldham chairman Simon Corney has previously said Holden would be a boss again one day while Paul Scholes, who Latics felt out over his managerial aspirations prior to hiring Kelly, has recently hinted he could be tempted to turn his hand to coaching.